It was early morning and we found ourselves in Nanning, China with no money and no clue of where to go or what to do. The previous night was spent on a train from Hanoi, and after a long period of detention, Ben’s dodgy looking cabin mates found themselves looking out the window of the Chinese immigration office as we rolled on by. But hey, you could find yourself in worse places being banged up. At least it was spotlessly clean.

Nanning was a shock. We had just passed by an hour of non-stop construction on our way into the city. Witnessed a landscape that looked like humans had lost an apocalyptic war and building cranes were now the dominant species on the planet. The people were rude and unfriendly and looked at us like we were time travelers from the past who hadn’t heard of our new construction crane overlords.

Ben and I set out to find an ATM to get some cash, the sweet money being little consolation after ten minutes of ridicule while trying to ask for directions. The original plan was to spend the night here. But that wasn’t happening. And so we approached the single english speaking ticket desk at the station and asked for the next available fast train north to Guilin. It couldn’t come fast enough.

As we neared Guilin the famous rolling karst mountains began to jog alongside the train. It was stunning. There is an old chinese saying (I’d wager the majority of wise chinese sayings are old) that Guilin’s scenery is the “best under all heaven”. It’s hard to disagree.

We rocked up to our hostel and went for a quick bite of sweet ‘n’ sour. The hostel (Green Forest Hostel) would turn out to be one of my favorites on the trip. The world cup was just kicking off and I remember spending many a fond night on the sofa with people from Peru, Holland, the USA and others, watching the matches at hours in the morning that shouldn’t really be used for watching football. 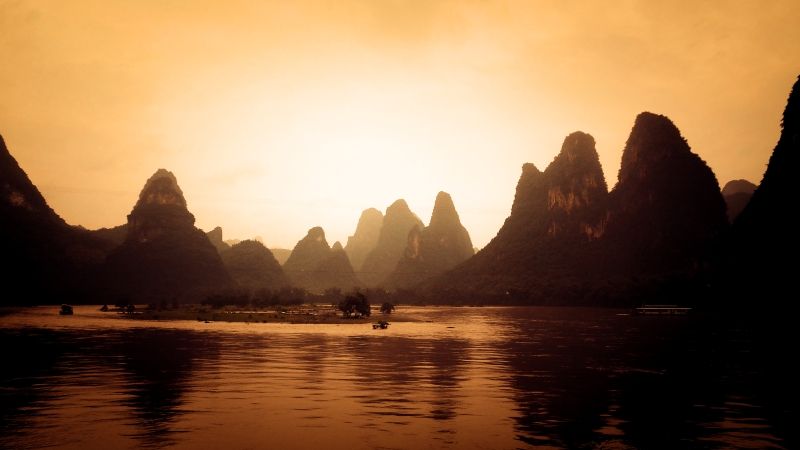 The main attraction here in Guilin is the Li River which winds lazily through the most stunning mountain scenery imaginable. Despite it being an overcast day we decided to take one of the many river cruises available. Typically it was in Chinese, and Chinese only. There were plenty of laughs and smiles at our expense as we tried to figure out the directions and the menu. We didn’t poison ourselves so joke was on them really. It takes a while to get used to the Chinese attitude. It’s hard not to come away with the impression you just aren’t respected as a foreigner, especially if you don’t speak mandarin.

Just ask Jimmy who got into a brawl with some heavyweight Chinese gangsters, had his hands and feet chopped off, and was nailed into barrel and thrown overboard. We would have asked for him back, only we don’t speak Chinese.

I loved the Li River, and I loved the mountains. I enjoyed looking at the lush semi-tropical bamboo forests which lined the river giving it an awesome primeval vibe. I was in awe at the dramatic crags and peaks of the mountains. I laughed at the little fishermen on the little bamboo rafts pulling alongside us to sell us fish and apples (together at last!) I didn’t love being spat on, literally, by a guy hacking his lungs up over the side, the wind blowing a huge yellow gob right across my jacket. I didn’t like that.

Guilin town itself is a cool spot. It’s notable for its twin Sun and Moon pagodas on the Fir River. It’s a quaint, quiet spot at night and the pagodas are pretty spectacular when lit up. You can even go inside and climb to the top of each one. They are connected by a bizarre underwater tunnel which runs underneath the river.

Back at the hostel Ben was telling us about his trip to the rice terraces. He had gone there instead of doing the river cruise, his reason being that it “looks too similar to Ha Long Bay, and I’ve already seen that”. I can kinda see his point. But in my opinion the Li River was even more spectacular in parts, and the dense jungles of bamboo and the cool little rafts made it sufficiently different to experience both. But then again we’re pretty sure he just did it just to hit on the American girl who was going there. A noble cause, so can’t complain.

Said American girl was there to study mandarin and Chinese culture, and like most people who study this, she claimed to already be an expert. She brought us, and a bunch more people from the hostel, to a local spot for a traditional Chinese dinner. What this meant was spicy, but unidentifiable things mixed with chicken heads and feet. It tasted much nicer than it sounds, but some ketchup wouldn’t have gone amiss. What’s wrong with a good ol’ burger anyway?

After a few days of jaw dropping scenery, lively hostel banter and tasty-if-you-don’t-know-what-it-is food it was with a heavy heart we boarded the train bound for Beijing.

All except Ben who decided to stay for a few extra days to help the American girl with her “research”. He’s so helpful!

Next time: Jimmy is kidnapped, Ben waves at an old man, we stumble across an old wall, and everyone leaves me.