It’s not the years – it’s the mileage. This was never more true than when you cram twenty seven people into a five person vehicle. Escaping the cave temples was only the start of the adventure.

After reluctantly leaving my german acquaintance to his fate I boarded another long sleeper coach south to a city called Aurangabad. Aurangabad is famous for two things; the amazing cave paintings and temples at Ajanta and Ellora, and the adorably named Baby Taj, or Bibi Ka Maqbara. You know those supermarket own-brand knock-offs? The Bibi Ka is to the Taj Mahal as Choco Puffs are to Coco Pops. In fairness I can’t be too hard on the place seeing as it is also a genuine tomb……..but for christs sake. It is still beautiful in it’s own way, but I cant but think it looks like a horribly compressed jpeg image compared to the original hi resolution version.

The cave temples at Ellora are a mere 45 minute bus ride from Aurangabad. Here, hewn into the hillside are dozens of buddhist, hindu and jain caves, with the oldest dating from roughly 600AD. The carvings and artwork in each cave gets progressively more ornate and spectacular as you follow their journey through history until you get to the enormous Kailasha Temple. This staggering hindu temple is the largest monolithic structure in the world, an engineering impossibility dedicated to Shiva the Destroyer. The temple, carved from one single chunk of mountainside, exists on many levels. You can go inside, walk around the various nooks and crannies admiring the statues and carvings outside, or climb up on the hillside for a birds eye view of this vastly underrated marvel of the world. My overriding thought here was how have I never heard of this before? That’s not saying much though.

The caves ring the mountainside, and you can get a tuk tuk from section to section if you don’t fancy ducking out into the heat. The oldest, the Buddhist caves, at the start can seem quite plain compared to the Hindu and Jain masterpieces at the end. It’s worth starting here and following through to the end. Be prepared to take a good few hours for this and take plenty of water – even though there is plenty of water, ice cream and snacks being sold here too. Don’t feel too guilty about pigging out. The calories will evaporate in seconds.

No adventure here is complete without my ongoing battle – or fued if you will – with my arch nemesis the Indian taxi / bus / rickshaw / tuk tuk driver. In this case I had gotten the public bus from the city out to the caves and was prepared to wait by the roadside for a bus going back. I was convinced by my new “friend” to jump in his jeep for a quick ride back to the city centre. It would only be 15 rupees…..or whatever it was we had agreed. Think of all those suckers waiting for hours in the blistering heat. Adios losers! Oh Wandering Boo will you ever learn?….. 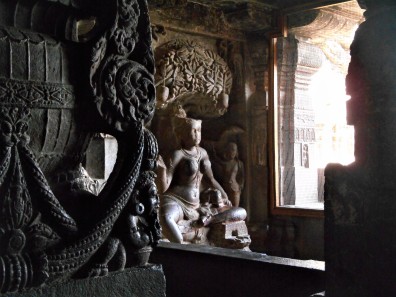 The jeep was already full but we didn’t leave. The jeep didn’t leave until there were five people crammed into the front and a small football squad in the back. The driver steered through the winding roads by hanging out the open door as it flapped dangerously in the wind. It was like the initial training montage in Cool Runnings.

At the edge of town our Bollywood Mad Max adventure spluttered to a stop and myself and the random french dude who had been sandwiched in the front were deposited on the roadside. In a twist everyone could see coming the fee wasn’t to the city centre at all…… but his tuk tuk buddy would be more than happy to take us there for another 15 rupees. After a few minutes of arguing we relented just to get home.

OK so 15 rupees to our hotels. Sorted.

French guy got dropped off at his.

With a smile my new buddy turned around to me: “Where is your hotel my friend?……..oh that is very far away…..other side of town…….will be another 30 rupees”.

I stopped the tuk tuk and jumped out. I realise it’s not a lot of money in the grand scheme of things, but it’s the principal, and the feeling that you are knowingly allowing people to rip you off is a feeling that will only bubble away for too long until it explodes. What started out as a mere 15 rupees to the town centre was now costing 60 rupees. I jumped into another tuk tuk which costed 15 rupees but at that time I didn’t care, I wasn’t feeding the rickshaw mafia. As I sped away I turned and shook my fist. Really hard. He will think twice about pulling something like that again.

I almost didn’t make it out of India either. After agreeing a taxi to the airport with my hostel guys I came down to the reception to find the two boys fast asleep and no taxi had been ordered. It was unsurprisingly tough to find someone at 4 am and eventually my two sleepy friends managed to find an old neighbour of theirs with a rickety motorbike. Despite making it in the nick of time for my flight to Mumbai, India wasn’t finished with me yet. While trying to make my way to the departure gate for my flight to Sri Lanka at Mumbai airport I had to turn around and go through security three times. No real reason. I think they just felt it was funny.

I’ll be honest when I say India wasn’t my favourite travel experience at the time. In fact after 70+ countries it could be towards the bottom of the pile. After a month of solo, bottom-of-the-barrel budget travel, it has the monopoly on low lights. It chewed me up and spat me out a broken man, and I’m pretty sure I smelt like shit too in a very literally way. You win this round India. You’ll probably win subsequent rounds too.

During my time there I was constantly reminded of my cockney criminal friend who I met on the train from Kolkata to Delhi. A seemingly hard as nails crook who was shot at while smuggling cars into Iran, among other equally believable stories. If he was bailing out on India after two weeks what chance did I have? I began seeing my budget backpacking trip here as a challenge, one I was determined to see out to the end.

In the end India did me a huge favour. By eshewing western style hotels, nice restaurants, and air conditioned transport it really opened my eyes to a level of rawness I hadn’t experienced yet. It slapped me around the jaw, kicked me in the arse, and sent me on my way into the big bad world. I licked my wounds for a while but eventually I came to see it as tough love.

Having said all that next time I’m definitely staying in a place with air con and plumbing.

Clichés aside, India is probably the place I have reflected on the most once I’ve left it, and I’m not quite sure why to be honest. The great philosophical mind of our time Karl Pilkington summed it up better than I ever could:

There is still a lot of it I’d love to experience though – Amritsar, Bandhavgarh, Kerala…….Next time will be better.

Or it will finish me off for good.

More ungrateful whinging next week when I detox in Sri Lanka